Indian Textile and Clothing (Apparel) industry is the second largest manufacturer in the world with an estimated export value of ~ US$ 31 billion and domestic consumption of ~ US$ 58 billion for the year 2011-12. The sector contributes to about 6% of the US$ 1.7 trillion Indian economy. It also provides employment to ~35 million persons directly & ~55 million persons indirectly. India is among the very few countries which have presence across the entire supply chain, from natural and synthetic fibres right up to finished goods manufacturing. It has presence in organised mill sector as well as decentralised sectors like handloom, power loom, silk, etc.

The industry has grown from US $ 57 billion in 2006 at a CAGR of 11.3%. Garments (Apparel) constitute an estimated 68% of the domestic market, followed by technical textiles (24%), and home textiles (7%). The current and projected size of Indian textile industry with break-up of domestic and export size is shown 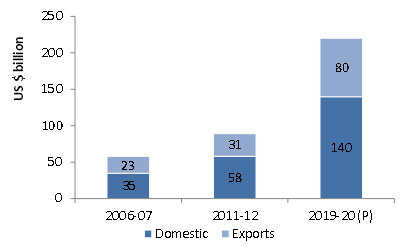 In 2011 global trade in textiles and apparel was around US$ 705 billion. This was approximately 4% of the total global trade of all commodities estimated at ~ US$ 15 trillion. During the period 2000 to 2010 the textile and apparel trade has grown at a modest CAGR of 6.4% per annum. Further, the Global Textile and Apparel, or T&A, trade is expected to grow to USD 1 trillion by 2020.

Major Textile Exporters to the World (% share) for year 2011 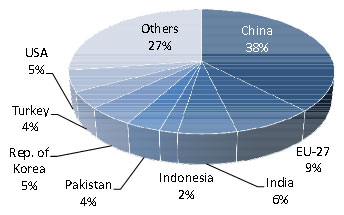